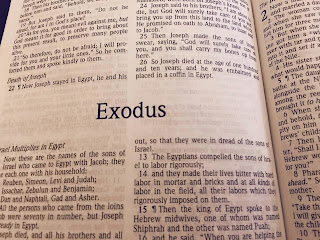 Israel had multiplied greatly in Egypt and a new king arose in Egypt, who did not know Joseph. This would also indicate that he did not know the Lord. The Egyptians treated Israel badly.

The Lord God appears to Moses from a burning bush on Mt. Horeb. He tells Moses that He has remembered His promise to Abraham, Isaac, and Jacob. He has also heard the cries of His people. God intends to rescue His people from Egypt and use Moses in the process. Moses is to go to Pharaoh on behalf of God. Moses fears this and God said that Aaron his brother would speak for him. God gives Moses miraculous powers to perform. When he throws down his staff it becomes a serpent, when he picks it up it again becomes a staff. His hand becomes leprous when he puts it into his garment and takes it out, then when he repeats the process it returns to normal. When he pours out water from the Nile on to the ground it turns to blood.

Moses and Aaron go to Pharaoh and of course he refuses to let the people go and make sacrifice to God. Pharaoh compounds their labors at the request. Moses by himself is such an imperfect Christ type that Aaron is need to get the full picture. God tells Moses to tell Pharaoh, "Israel is My son, My first born." I believe this to be a for telling about Jesus the Son of God.

For the Bible text click on this link: Exodus