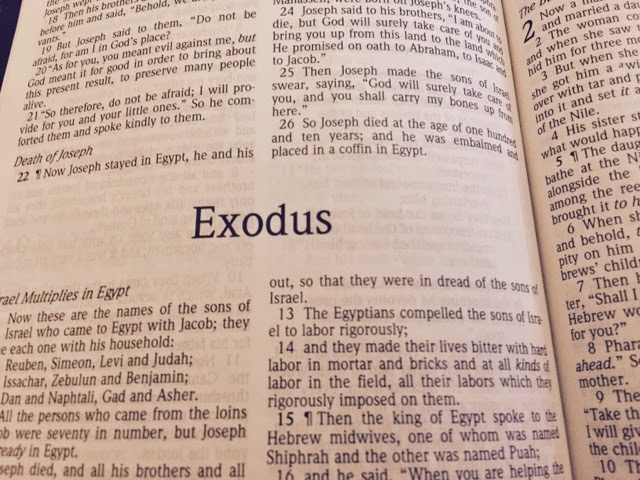 The firstborn belongs to the Lord. The first born of all the herds belongs to the Lord, they either need to be redeemed or killed, but cannot be used by the people without redemption because they are the Lords. The firstborn male child in every family must be redeemed. Why does the Lord require this in Israel? People soon forget, but because this is required it will be asked why we are doing this? Then the Lord is exulted when the Israelites tell their sons how the Lord took them out of Egypt with power, killing the firstborn of the beasts and the Egyptians. It is for the glory of the Lord alone.
The Lord led the Israelites with a cloud by day and with a pillar of fire by night.  He led them to where they thought that they would trapped. The Lord did I mighty miracle. Parting the sea, a wall of water on each side, they walked through it's mets on dry ground. The Egyptians that followed drowned as the water returned.  The Lord is continually fighting our battles. Israel praised the Lord in song and dance because of what He had done.  Should we not praise Him too for sending His Son Jesus who paid the price for our sins?
They then went three days journey from the Red Sea and could not find water. They came to water at Marah. The water there was bitter, so the people grumbled to Moses. Moses cried out to the Lord and He had him throw a tree into the water and the water became sweet. This was to show that the Lord provides, never leaving or forsaking. But here at Marah (bitter) the Israelites were put under stipulation. That if they do right in the sight of the Lord God He will not do to them as he did to the Egyptians, something for which they would soon fail at.  The Christian's only stipulation is faith in Jesus Christ and that faith is a gift from God.
For the Bible text use this link: http://olivetree.com/read/nasb/Exodus/13

Today I write with a broken heart an open-letter to my nursing colleague, friend and I hope, brother in Christ William Davis, RN. Will has been accused of murder and was arrested on April 11, 2018. I write this as an open-letter because this has become an open-matter. Will Davis and Family Copied from Facebook Dear Will, I miss your smiles and your jovial laughter on our nursing unit. I first meet you about 5 years ago in the spring of 2013. My wife met you before I did; I remember her telling me, “I met a guy in orientation who is going to work on your unit, he is so excited to work on your unit and is real fun.” From that time on you were usually laughing and all smiles. Often times you brought a bag of candy to work, because of this, and your jovial laughter I nicknamed you the Candyman and would even sing in your presences, “Who can make the sun rise and cover it with cheer…the Candyman can, the Candyman can because he mixes it with love and makes the world taste good.”
Read more