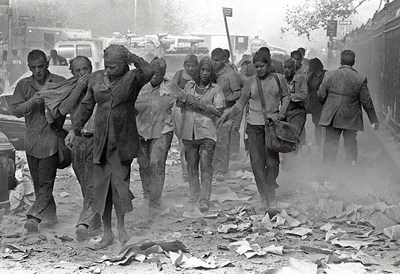 The above picture is from that horrific day on September 11, 2001 when the twin towers of the world trade center were struck and subsequently destroyed.  Many people lost their lives that day, but one women, Angela Braxton,  dead in her trespasses and sins was subsequently given new life in Christ Jesus.  She is in the front of this pick easily found on the internet if you search (women covered in ash September 11th).  She was in one of those towers when it was struck.  She called out to the Lord that she did not know or love to save her, and He did.  I first met Angela in 2013 in New Orleans at the Super Bowl Outreach with Sports Fans Outreach International.  She was there with 100 other saints whom the Lord saved, proclaiming that there is salvation in no other name, but Jesus Christ alone.  To the glory of God I have been able to see Angela at every Super Bowl Outreach since.

"Today is a day of remembering for me. Fourteen years ago as I went about my daily business, I never thought about where I would spend eternity or if this would be my last day. 24 hours later, I begged a God I did not love, did not thank, did not think about, did not serve, nor bring glory to.... to not let me die!!! What a difference... A new heart, a new love! A new birth!! He calls me His beloved, His child. I'm tearing up right now. What a Savior, What a merciful, long-suffering, compassionate God. My Lord and My God!!! My All In All!!! Thank you Jesus!!!!" ~ Angela Braxton