A Liar and A Fool 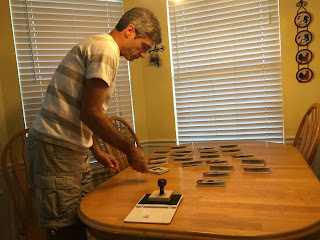 Wednesday mornings I have set aside to purposefully go out into the world and share the gospel of Jesus Christ.  What do I mean by share the gospel?  I tell people the good news about Jesus Christ; who He is, what He has done on behalf of His sheep, what He is presently doing on behalf of His sheep, and what He will do; as witnessed and testified to by His apostles in the New Testament.  Since the end of August I and another brother, Jason McMurray of First Baptist Lindale have spent every Wednesday morning until noon on the Campus of Tyler Junior College.  We purpose to do so Lord willing until the end of the fall semester.

This past Wednesday was quite a bit different than the previous weeks.  We found ourselves in many deep conversations and even under attack a few times, which had not happened during the semester previously.  The day itself began strange, even before arriving on campus.

I like to go running every morning when I get a chance.  My normal daily run is about five miles.  While out on a run I like to talk to God and think about His word.  This past Wednesday morning while yet early a car was headed towards me and slowing.  I have seen this many times before, I run on the back roads around Lake Tyler so often someone is lost and looking for directions.

The car had two men in it wearing shirt sleeves and ties.  The driver had a pamphlet in his hand and said; "Can we give you a gospel tract?"   I thought "This is strange!" I am 4 miles into a 5 mile run, thinking about what I am about to preach and a car pulls up beside me and the driver asks can he give me a gospel tract.  So I stop and ask, "Who are you with?"  The man then answered, "We are Jehovah witnesses!"  So I thought briefly as to how I should react to this unexpected meeting.  Being aware of their cult's delusion I elected not to get in a discussion with these men; I was after all on a back road not yet done running and I had somewhere else that I needed to be.  So I followed the advice of scripture and simply said, "In the beginning was the Word, and the Word was with God, and the Word was God." (Jn 1:1).  I then continued on my run.  Proverbs 26:4-5 says,


"Do not answer a fool according to his folly,
Or you will also be like him.
Answer a fool as his folly deserves,
That he not be wise in his own eyes."

As I continued to run I was now thinking about this meeting and a thought entered my mind.  What the man had said; "We are Jehovah witnesses!" was an out right lie.  In order to be a witness of someone you must first have seen them.  Well had these men seen Jehovah?  I think not, John 1:18 says,


"No one has seen God at any time; the only begotten God who is in the bosom of the Father, He has explained Him."

And Jehovah Himself previously said to Moses,

There is but One witness of the Father and it is the Son of God Jesus Christ.  For He alone can say,

This is the reason that I like to talk about Jesus using scripture alone and by handing out Gospels of John.  Almost everything that I say is either scripture quoted or scripture summarized.  Jesus is the Father's witness; the apostles and the Holy Spirit are Jesus' witnesses. 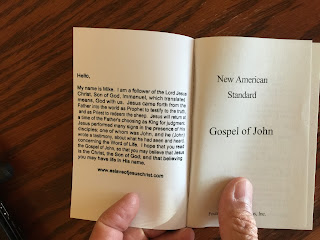 - February 18, 2019
Please, Please, Please open your mouth and preach the gospel! Recently I was asked to do two things: 1) Think back to my own experience of how I was evangelized and describe the experience. 2) If I could go back and give advice to the person or people who ministered to me what would it be?  I began running as a young child. At the age of 5, I ran my first mile with my dad. At the age of 10, I wanted a pair of running shoes like the big runner’s wear. My dad challenged me, if I could run 5 consecutive miles at less than 8 minutes per mile he would by me a pair of running shoes. I met the challenge and he bought me the shoes. While at the runner’s store there was a flyer for an upcoming 10k race. My dad signed us both up for the race. The next year my dad was too busy with work to run with me, but we had new neighbors across the street. I noticed that this man would come home every evening and go for a run. I began running with him, at the time he was pursuing a doctorate at D. T. S., …
Read more

Suffering and Death in the ICU

Suffering: The state of undergoing pain, distress, or hardship.[1]Death: The end of the life of a person.[2]Intensive Care Unit: A department of a hospital in which patients who are dangerously ill are kept under constant observation.[3] I cannot continue doing what I have done for the past 21 years. My last day in the intensive care unit will be January 4, 2019. I will be transitioning to Cardiac Rehabilitation. This will be a completely different type of nursing. Cardiac Rehabilitation combines my love of aerobic exercise, knowledge of cardiology and love of people suffering with heart disease. I will be able to invest in their lives in a way that I was never able to do before.  These past 5 days are an example of what my work has been like for the past 21 years: I worked 4, 12 ½ hour shifts. I took care of 10 persons, all of whom suffered but some greater than others. A woman 10 years younger than I suffered a myocardial infarction (heart attack); a woman suffered greatly in the i…
Read more

THE LIFE AND ENQUIRY OF WILLIAM CAREY

- April 23, 2019
The famous London Baptist preacher, C. H. Spurgeon said in 1873: “Every Christian is either a missionary or an imposter.”1 Was he saying that every believer must move overseas and preach the gospel? This would be unlikely and unreasonable because there would be no believers remaining in his or her homeland if this were to occur and some are not physically able. It is more likely that he was saying that the heart of every believer in Christ Jesus must be aligned with the mission of God. All Christians are to be involved in missions: some will go overseas, and some will send others through financial support and continual prayer. In some way, all believers are involved in missions or they are an imposter.2 On February 10, 1779 William Carey was converted to Christ at a Congregationalist worship service in Hackleton. Prior to his conversion, Carey did not have much of an acquaintance with ministers; therefore, after his conversion he began drawing all of his theology from Scripture alone. …
Read more

Mike Peek
I am follower of the Lord Jesus Christ and a Registered Nurse. My education includes a Bachelor of Science in Nursing from the University of Texas at Arlington and a Master of Theological Studies from Midwestern Baptist Theological Seminary.