Showing posts from May, 2016
Show all

He Is (Yahweh) a God of Unfailing Love

- May 15, 2016
The intent of this article is to state the theology of the Pentateuch and show how that theology governs and critiques the history and theology of the Historical Books. The Levites’ prayer in Nehemiah chapter 9 does exactly what I intend to do with this essay in a more beautiful way than I could ever attempt to do myself. [1]   When writing about the Levites’ prayer William MacDonald said, “The overriding theme of the prayer is God’s faithfulness despite Israel’s waywardness.” [2]   This prayer by the Levites in Nehemiah is a prayer that follows the theology of the Bible from Genesis through 2 Chronicles. [3] Ezra the scribe brought out the book of the law of Moses, stood on a platform, and read it before all the people. While he read the people listened, and the Levites explained the law to the people while the people remained in their place. This caused the people to lament, but Ezra made it a holy day, and turned it into a day for feasting. This was followed up by the priests
Read more

I am a Christian 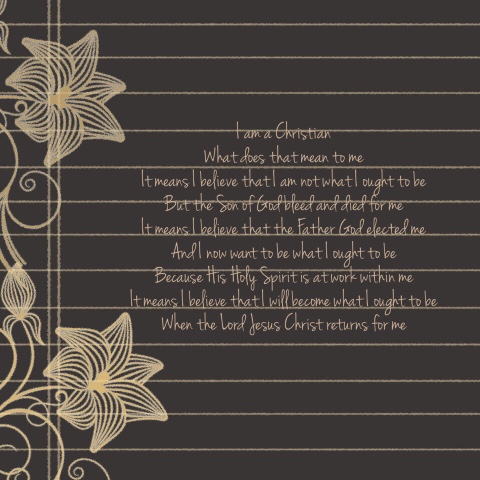 “In the beginning God created the heavens and the earth. [1] “God created man in His own image, in the image of God He created him; male and female He created them. [2] “Then the Lord God took the man and put him into the garden of Eden to cultivate it and keep it. The Lord God commanded the man, saying, "From any tree of the garden you may eat freely; but from the tree of the knowledge of good and evil you shall not eat, for in the day that you eat from it you will surely die. [3] “When the woman saw that the tree was good for food, and that it was a delight to the eyes, and that the tree was desirable to make one wise, she took from its fruit and ate; and she gave also to her husband with her, and he ate. Then the eyes of both of them were opened, and they knew that they were naked; and they sewed fig leaves together and made themselves loin coverings”. [4] Ever-since the first man (Adam) and the first woman (Eve) ate from the tree of the knowledge of good and evil al
Read more
More posts