Showing posts from September, 2016
Show all

I think that it is a strong possibility that John chapter 20 is a new creation narrative keeping with the Johannine theme of the incarnation, God in human flesh. John 20:1-2 Mary Magdalene came to the tomb early on the first day of the week while it was still dark. In the Genesis narrative of creation there was darkness before God said, “Let there be light.” (Gn 1:2-3) John and Peter came running to the tomb, John peered into the tomb, but Peter when he arrived went inside. Peter saw the grave clothing, but when the beloved disciple saw it he believed that the Lord was risen, and yet did not fully understand the scripture. (Jn 20:3-10) In John 20:11-18 Mary stayed at the tomb weeping which was in a garden. She looked into the tomb and saw to angels in white sitting. I believe that this is a picture of “The Mercy Seat” that sat atop the Ark of the Covenant inside the holy of holies.  (Ex 26:33-34) We know that Mary Magdalene was a sinful woman, she a sinful woman gets the privilege
Read more 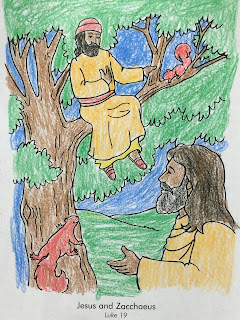 In this blog post I would like to talk about the way that we should view finances as followers of Jesus Christ. Jesus said; “Sell your possessions and give to charity; make yourselves money belts which do not wear out, an unfailing treasure in heaven, where no thief comes near nor moth destroys. For where your treasure is, there your heart will be also.” (Luke 12:33-34) Does the Lord’s statement about possessions seem extreme? Does Jesus really mean to sell your possessions and give to charity? Why would he say such a thing? Don’t we need things in order to live? It seems that Jesus was in the habit of saying these kinds of extreme things about money and possessions. He told the rich young ruler virtually the same thing when he asked the Lord, “Good teacher, what shall I do to inherit eternal life?” (Luke 18:18) At the end of a discussion about keeping the commandments the Lord said to the rich young ruler, "One thing you still lack; sell all that you possess and distribut
Read more
More posts