The Four Principle Practices of the Early Church 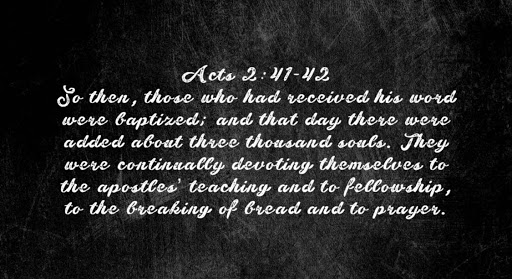 The disciples were all together in one place on the day of Pentecost. The Holy Spirit came upon them suddenly and they all were changed in an instant. There were Jews living in Jerusalem who were from every nation on earth; therefore, they all spoke different languages. These Jews were bewildered because they were hearing the disciples of Jesus speaking in their own varying native tongues. They knew that the men who were speaking were Galileans, so why were they hearing them in their language? These men who were hearing were all Jews, but they were from every nation, tribe and tongue on earth as a result of the diaspora. (cf. Acts 2:1-11)

The diaspora is the dispersion of Jews beyond Israel. In most cases it was a voluntary departure from Palestine; and therefore, should not be confused with exile. There was a forced exile by the Babylonians; however, the Persians allowed the exiles to return. All who remained outside of Palestine at the beginning of the first century did so voluntarily. Also keep in mind that the day of Pentecost occurred well before the second temple was destroyed by the Romans in AD 70. The Jewish people considered themselves exiles after losing all independence in AD 132-135. However, on the day of Pentecost all Jews who resided outside of Palestine did so voluntarily.1

Some of these men were trying to figure out what it meant to hear these Galileans speaking in their native tongues because there was an obvious miraculous sign occurring. Others were mocking and calling the disciples drunkards. (cf. Acts 2:12-13) Throughout all of scripture we see this division among men concerning the supernatural works of God. In John 11:45-46 Jesus demonstrated the supernatural work of God by raising Lazarus, a man who had been dead for four days out of the grave alive. Many of the Jews who saw what Jesus did believed in him, but others went to the Pharisees and told them Jesus was doing things which caused the Jewish people to follow him.

Peter took the opportunity to preach the gospel using the text of the Old Testament to demonstrate that Jesus is both Lord and Christ. Those who heard were pierced to the heart. These men were asking the apostles, "Brethren, what shall we do? Peter told them to repent, and that each of them should be baptized. The ones who believed and were baptized were added to the church. (cf. Acts 2:41) This early church was about three thousand souls which is no insignificant number. (cf. Acts 2:14-36) The first century Jewish historian Josephus estimated that there were six thousand Pharisees in all of Palestine at that time. Suddenly in a single day there were half as many Christians as there were Pharisees in Palestine.2  Which means that this early church was no small group. By any standard it would be considered a megachurch. Small house churches would come later in Acts as a result of persecution and new churches forming in different places.

These were then devoting themselves continually to four things:
The apostles were commissioned by Jesus to make disciples, baptize them and teach them all that Jesus commanded. (Mt 28:16-20) That is exactly what they were doing in the first church. Discipleship refers to the process of growth and development. The English word disciple normally means to follow a leader or be a student which is a translation of the Greek μαθητής mathētēs.3  “A ‘disciple’ was not only a pupil, but an adherent; hence they are spoken of as imitators of their teacher."4

These early believers had a desire to be together. We can also see how they were sharing property and meals together. They had a since of being separated to God from the other people and thought of themselves in terms of community. (cf. Acts 2:43-47) The breaking of bread in Acts 2:42 is likely referring to the Lord’s supper. The fourth thing that this early church was devoting themselves to was prayer which showed that they had total dependence on God.5