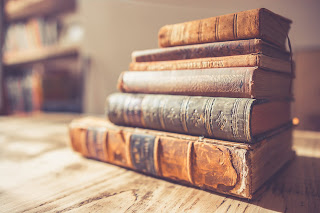 One summer, when in grade school, my mother put me in a vacation Bible School at a United Methodist Church in Garland, Texas. Later, as a 6th grader, we went on a weekend retreat to Tyler State park for what was called confirmation. The following Sunday we were all (6th graders) formerly made members of the church. I personally had no idea what that meant. As part of our confirmation we were all given copies of the Good News Bible (GNB). This translation was completed by the American Bible Society in 1976. It is intended to express the meaning of the original text in conversational English and is said to be a good translation for those who read/speak English as a second language.1


When I was older, as a birthday present from my father he gave me an NIV Study Bible (New International Version). It was large; therefore, I felt big when carrying it to church. This translation sought to be a halfway ground between British English and American English. This translation also tries to express the meaning of the original text in a more functional approach.2 As far as the study Bible is concerned Duvall and Hays say that this has to do with marketing and has nothing to do with translation.3

In May of 2003 I began following the Lord and committed to reading his word every day. I went to lifeway and got two English translations by recommendation. I got a copy of the New Living Translation (NLT) for my personal devotion and a copy of the New King James Bible (NKJV). The NKJV was used by our head pastor of the Baptist Church we were attending. The NLT is a thought-for thought translation from 1996.4 The New King JamesVersion tries to update the English language of the King James Version using modern English.5 The KJV and NKJV used a different underlying Greek text than the other translations in use today. The KJV was translated using the Textus Receptus. Other English translations use the Electic Greek text. The Electic text is comprised of a greater number and older manuscripts than the Textus Receptus. Textual critics used those older and more numerous manuscripts to come up with a better Greek text.6

Since April of 2012 I have been using the New American Standard Bible (NASB) during personal devotion and study. The NASB is the translation that our pastor preaches from. Also, when I began seminary in March of 2015 I was told to use either the English Standard Version (ESV) or NASB for my classes. Both of these translations adhere closely to the original text in form and word using the Electic Greek text but from a different group of translators.

A Few Things to Consider: