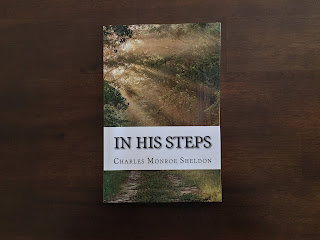 The story is set in the late 1800’s in the midwest. A young man visits the community of Raymond. A community of well to do people. He came not looking for a hand-out but direction for employment and perhaps a little kindness. One morning he sits in on the service of the First Church of Raymond. After the pastor Henry Maxwell closed, the young man began to speak. The young man was troubled by hearing Christians sing,
“All for Jesus, all for Jesus,
All beings ransomed powers,
All my thoughts, and all my doings,
All my days, and all my hours.”
He was troubled by what they meant, because the words did not fit their actions. He said, “It seems to me there’s an awful lot of trouble in the world that somehow wouldn’t exist of all the people who sing such songs went and lived them out.” After saying these things, he collapsed and later died.
The pastor and others were convicted by the young man’s dying speech. The following Sunday, at the end of the service, Henry Maxwell asked for volunteers from the First Church who would take the pledge to not do anything for the next year without first asking, “What would Jesus do?” After asking, each volunteer is to follow what he/she knows Jesus would do, no matter the consequence. He challenged them to follow Jesus’ steps as closely and as literally as he taught his disciples to do.
There were about fifty persons who took the pledge; however, the narrative follows the lives of ten individuals who committed to follow Jesus’ steps: Henry Maxwell (pastor), Rachel Winslow (opera singer), Virginia Page (wealthy young woman), Mr. Norman (news paper owner), President Marsh (college president), Alexander Powers (railroad superintendent), Milton Wright (local store owner), Dr. West, and Jasper Chase (novelist) who broke his commitment and went back to the world. Others entered into the story the second year having been inspired by these disciples to follow Jesus’ steps.

I had been led to believe that asking, “What would Jesus Do?” is a bad idea, because it causes people to create a Jesus who looks like oneself rather than the Jesus of scripture. However, this is not what I found in the context of Sheldon’s book. After taking the pledge, the characters seriously contemplated and asked, “How are we to know what Jesus would do?” The answer that they came to was two fold: First, they would know what Jesus did by studying his life and what he taught his disciples. Second, each of their situations are different than that of Jesus and his apostles; therefore, they needed to know what principles to follow. The group met together regularly to discuss what following Jesus Christ meant and Henry Maxwell (pastor) was their guide on what the scriptures taught. But it is the Spirit who would be their guide on applying the principles in each of their own life situations.
I believe that asking, “What would Jesus do?” before doing anything at all is what every Christian should be doing, but in order to do so, one must be studying what Jesus did and taught his disciples on a regular basis. This should be done in private study, contemplation and prayer, but it should also be done in community with other disciples seeking to follow in the steps of Jesus. Reading what Jesus did and taught must first be understood in the first century Jewish-palestine context in which he and his disciples lived. Second, one must understand what the universal principles taught in the text are. Thirdly, one must contemplate how those principles should be applied in his or her own situation.
Like the early church, the Characters in Sheldon’s book learned that seriously following Jesus is going to cost you something. The disciples in Sheldon’s story called it taking up the cross. Should we seriously follow Jesus Christ? Is marginal Christianity enough? Is marginal Christianity even Christian? I spent this advent season reading some of the things that the early church writers wrote. Christianity for the first 300 years of the church was illegal; therefore, Christians suffered greatly for following Jesus Christ. Marginal Christianity is not Christian. The characters in Sheldon’s book are fictional, but asking “What would Jesus do? before doing anything at all is a good one. This is something that I will be seriously considering in any decision I make going forward. Read “In His Steps” by Charles Sheldon.
[1]In His Steps, cdli:wiki, https://en.wikipedia.org/wiki/In_His_Steps#cite_note-2.