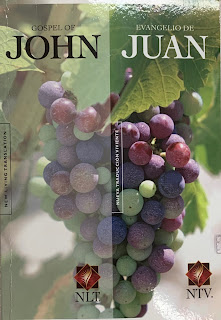 This past Sunday, Darlene and I attended Rodney Skyles’ class. Rodney taught a lesson from Matthew 17:24-18:11, he named the lesson: “Offenses and Humility.” Rodney is the director of operations for 89.5 KVNE Christian Radio for Tyler and Longview, Texas.  He made an announcement in class that interested me greatly because my heart has been lead to Spanish speaking people in missions; therefore, I am actively learning the Spanish language. The announcement is that KVNE would be launching two new Christian radio stations, one of which is a Spanish station (102.3 FM). The station is scheduled to go live in January. This brings me to the reason I am learning Spanish.

Following corporate worship service we ate together as a church body, a Thanksgiving dinner. There is a regular attender of our church, La Señora Effe. Effe is the mother of one of the members at Sylvania Church.  Since starting Spanish lessons and memorizing the prolog to Gospel of John in Spanish, I haven’t actually attempted to speak to a Spanish only speaking person. Inspired by Rodney’s announcement, I saw Effe sitting three chairs down from where I was, so I decide to go talk with her. We were actually able to communicate and I recited the first 5 versus of John’s Gospel. She recited Psalm 23 for me and gave me this book mark. What a wonderful time of fellowship the Father gives us in the Word, when the barrier of language is taken down. I spent the remaining afternoon doing Spanish lessons. 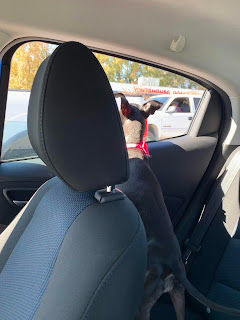 I was away from my normal location on Monday, at the Lake Palestine clinic, and I had an enjoyable day with the patients but isolated from the other staff members. On Tuesday, I had the day off work and I took our dog Mishka for a ride. On Thursday morning, right after I had prayed for these attributes, I was shown how far from them my love actually is. I was eating breakfast and doing my Spanish lesson, our daughter Bethany had departed for her job when she came back in the door and impatiently requested that I help her with a flat tire. I had to fix her flat tire and was angry because my morning had been disturbed, I had to stop my breakfast and repair her flat tire, which made me late for my job. I also strained my back while fixing her flat tire, probably because I was so tense while doing so. I had read that morning the words of Christ from Matthew 7:12


In everything, therefore, treat people the same way you want them to treat you, for this is the Law and the Prophets.

I was scheduled to work from 7:30am to 6:30pm but arrived 1 hour late. Then, the man I had substituted for in Palestine sent me a text message that indicated that he was not satisfied with the work I had done on Monday. I spent the majority of the day feeling depressed and my back was aching, but one of my coworkers (Amanda) demonstrated kindness towards me, she offered to stay and close the department in my place. Friday morning I did not have to be at work until 10:00am. Despite my back feeling tight, I decide to go for a run; I completed the run but was very slow and felt fatigued. Just before departing, I saw Bethany in the hallway and said to her: “Bethany, are you about to leave.” She replied in a forceful manner: “I DON’T HAVE TIME TO TALK TO YOU.” This hurt my feelings. I had changed my prayer just before this occurred from the attributes that I had mentioned earlier, to Matthew 7:12 asking God to grant it to me to treat people the same way that I want them to treat me. The reason that I spoke to Bethany, was because I wanted to know if I should leave the garage door open because I was departing for my run and didn’t want to close it if she was about to leave. Feeling hurt by her words, I didn’t speak for fear that I may speak harshly, so I turned down the hall and went for a run.

I will continue to ask the Father to grant me these attributes of love and grant me to treat all people the same way that I want them to treat me. I’m tired but cannot do anything about what others think, say and do; however, I can think good thoughts about them, I can say kind words to them and I can show them kindness with my deeds as Amanda did to me. This is the way that I want to live in the here and now and will be seeking to do so with the help of God.

On Saturday morning, I ambulated patients on the 3rd floor of the heart hospital, which happened to be the unit I spent the majority of my nursing career on as a CVICU nurse. The unit has changed a great deal from when I first started there 18 years ago, they now have a mixture of ICU and post surgical telemetry patients, the latter are whom I was ambulating. Darlene spent Friday night visiting her mother and sister. When she got home she wanted to go and see the movie: “A Beautiful day in the Neighborhood.” Seeing that movie was like putting a bookend on the shelf of this week. I am seeking to be like my Lord and Savior Jesus Christ already in this present age and I know that all whom the Father elected for eternal life will be like Jesus in the age to come.