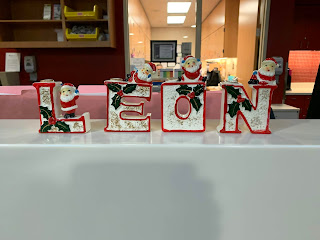 During the month of Advent, the Peek household displays four silver colored letters on our mantle above our fireplace that spell “NOEL”; these serve as hangers for our stockings. A family tradition started by one of our children is for someone to change the spelling to “LEON” until someone in the household notices. In fact, the storage box that contains these mantle pieces is marked LEON on the lid. The picture was taken at my work in the Cardiac Rehab depart at the Louis and Peaches Owen Heart Hospital. I rearranged the spelling to say, “LEON” until someone in the department noticed.

This brings to mind a thought that I had this week about words. Words are very important but the meaning of the words are even more important. According to the Oxford English dictionary the word “NOEL” means “Christmas, especially as a refrain in carols and on Christmas cards.” Noel was borrowed from early 19th century French. However, if a person does not know what “NOEL” means it might as well say, “LEON.”

For a little over 2 months now I have been learning the Spanish language. In a class at Sylvania Church on reading, our pastor spoke of memorization of Scripture as a useful technique for deeply studying a passage. I have used this technique myself for many years. When I study a passage, I will memorize it because in memorizing the text I look more deeply into what the text is saying. However, I do not always continue in a particular text but move on to others but not so with the gospel of John. 7 years ago I decided to memorize the gospel of John and have continued to recite 1 chapter a day ever since. It is my tradition, when preaching in the gospel open air to recite the Prolog (first 18 verses) then summarize the content of the entire book while offering passerby's a copy of the book. Because the Prolog to John’s gospel is so rooted in my memory, it occurred to me that I should memorize the text in Spanish for 2 reasons:

However, something occurred that I was not expecting; learning Spanish and memorizing this text of Scripture in a different language has taught me something about the Word of God. I got the idea to memorize the Prolog to the gospel of John when I came across a bilingual: English and Spanish copy of the gospel of John in the New Living Translation (NTV is the Spanish version of the NLT); however, this is not the translation that I use, nor is it the translation that I memorized the text in English. I started out using the NTV but started over again using the Spanish version of the New American Standard Bible (LBLA). Stay with me because I will need to tell you a little bit about how Spanish works to show you something really interesting about the Word of God.

You may note that the English, “Word” is translated, “Verbo” in Spanish; however, you should know that “Verbo” is not Spanish for “Word.” “Palabra” is the Spanish noun, “Word.” The NTV used “Palabra” but the LBLA used, “el Verbo.” Why? The Spanish noun, “Verbo”  literally means verb in English, it is not a verb but is the Spanish word for verb. So, are the translators of the LBLA calling Jesus Christ the incarnate “Verb?” Yes, they are, and hear is the reason.

In the creation account of Genesis chapter 1, the phrase: “Then God said,” occurs repeatedly in English and in Spanish, “Entonces dijo Dios.” Entonces is the adverb which modifies the verb. Dijo is the first person conjugation of the verb “decir,” which means: say, utter, tell, call, mention or recite. Therefore, Jesus Christ is the incarnate “said” of God.

Reflection
Learning another language is helping me to go deeper into the Scriptures, could this also benefit you? Words are important but their meaning is even more important; in your study, are you seeking to understand meaning?