The Lessor and the Greater Revelation 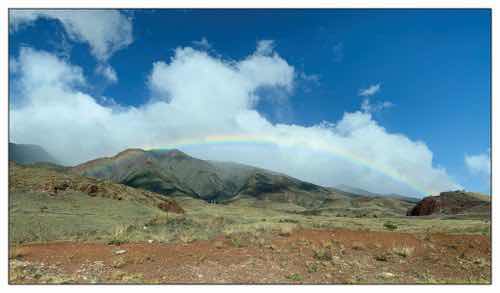 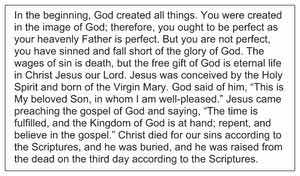 The tract that I formed is from God’s material and it is two sided just like the revelation of God. On one side is a picture and on the other side are words. Each side is a representation of God’s revelation. The picture represents the natural revelation, the created world that we live in and walk on. The words represent the special revelation, that is the Word of God.
The picture was taken by my wife when we were visiting Hawaii. It depicts earth, vegetation, mountains, light, sky, water and a rainbow. I chose this picture because it so vividly depicts natural revelation. When I look at this picture, much less the actual scene, I know that there is a powerful creator who made these things. The creation tells of the truth of God and the rainbow as revealed in the greater revelation tells of the love of God.
Scripture is the greater revelation. Scripture is the greater revelation because men are unable to see God in creation because their hearts are darkened. I cannot say anything or do anything to save anyone. Some men coerce human emotion but I am not such a man. Many evangelist coerce human emotion, which gives the appearance of faith but is it truly a saving faith? The Lord told his chosen apostles, John 15:26-27

It is the Word of God and the Spirit of God who brings a person to saving faith in our Lord Jesus Christ; therefore, all of the text in this tract is Scripture. I have either summarized or directly quoted Scripture, as it has been translated into English, in the Updated New American Standard Bible, 1995. I have summarized because of limited space; nonetheless, everything in this tract comes from either the lesser revelation or the greater revelation.
The first sentence is a paraphrase if Genesis 1:1 “In the beginning God created the heavens and the earth.” The second sentence moves to the creation of mankind in Genesis 1-2 and moves to the fall in Genesis 3. Jesus told his disciples, “For I say to you that unless your righteousness surpasses that of the scribes and Pharisees, you will not enter the kingdom of heaven… Therefore you are to be perfect, as your heavenly Father is perfect.” (Matthew 5:20-48) Between these parenthetical statements, the Lord taught his disciples what the righteousness that surpasses the scribes and Pharisees looks like. The righteous that all must attain to is the righteousness of God. People love to say, “No one is perfect!” But does that make it ok? We are to be perfect because our heavenly Father is perfect. (Mt. 5:48) The fact that we are not perfect should tell everyone that something is wrong.
The apostle John described God as light and love. (1 John 1:5, 4:8) When light shines on something, that which was formerly not seen becomes visible. So when the apostle said that God is light, he was saying that God is truth. This is the opposite of what the Lord said about the devil.

John 8:44
You are of your father the devil, and you want to do the desires of your father. He was a murderer from the beginning, and does not stand in the truth because there is no truth in him. Whenever he speaks a lie, he speaks from his own nature, for he is a liar and the father of lies.

However, God is light and love; therefore, his children should be light and love but we are not, we have all sinned and fall short of the glory of God. (Rom. 3:23) “Grace and truth were realized through Jesus Christ.” (John 1:17) To see and hear the Lord Jesus Christ was to see and hear God; he revealed the nature of God in human flesh. (John 1:18)
I directly quoted Romans 6:23: “The wages of sin is death, but the free gift of God is eternal life in Christ Jesus our Lord.” Because it gives the two sides of God’s person in a single breath; truth and love revealed in a single sentence. Jesus was conceived of by the Holy spirit and born of the Virgin Mary; he is fully God and fully man in one person, this is one of the five essential beliefs of the Christian faith.
God was pleased to reveal the person of Christ as his beloved Son.

Matthew 3:17, and behold, a voice out of the heavens said, “This is My beloved Son, in whom I am well-pleased.”